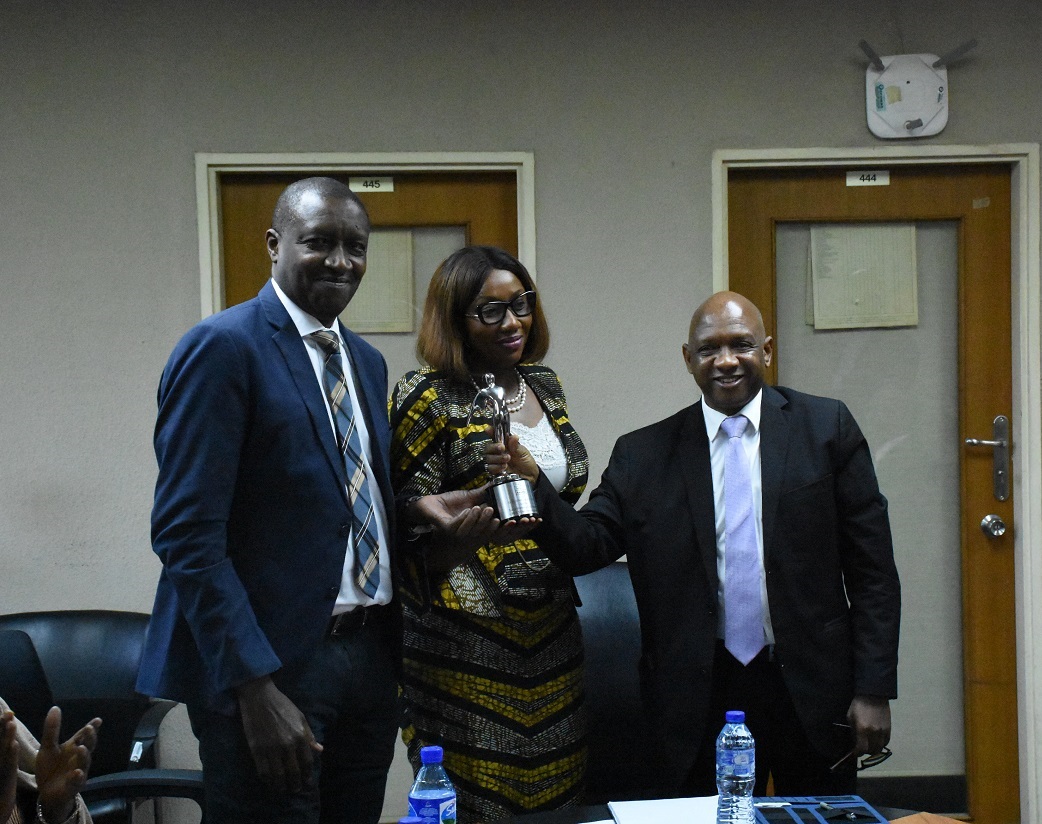 Abuja, Nigeria August 25, 2022. The ECOWAS Early Warning Directorate (EWD) held the inaugural meeting of the Joint Analysis Response Planning (JARP) Working Group at the EWD’s Situation Room on the 25th of August 2022, with the support of the United States Agency for International Development’s Reacting to Early Warning and Response Data in West Africa II program.

Led by H. E. Madam Damtien L. Tchintchibidja, the Vice President of the ECOWAS Commission, the meeting deliberated on enhanced linkages between sub-national, national and regional Early Warning Early and Response efforts and the harmonization of priority and focus areas across the region.

The meeting also served as the formal handing over of all USAID REWARD products and processes to ECOWAS, and the official presentation of the Telly Award bestowed for the video documentary on the ECOWAS Country Risk Vulnerability Assessments which won Silver, topping 93% of the competition entrants and putting ECOWAS alongside other Silver winners such as ESPN, Univision, Boston Globe, and Google.

In her opening remarks, the Vice President of the Commission expressed her appreciation to USAID on behalf of the President of the ECOWAS Commission, for the financial and technical support to the Commission through the USAID REWARD and REWARD II projects. “The JARP compendium, the Country Risk and Vulnerability Assessment reports and manual, the Human Security Index and significant capacity building are the concrete achievements of the REWARD and REWARD II projects over the last seven years. These achievements have equipped EWD and ECOWAS with outstanding early warning and early response processes, tools and methodology”, the Vice President stated.

In her statement, Ina Pislaru, the Senior Regional Governance Advisor of USAID West Africa appreciated the ECOWAS Management and personnel for providing strong leadership throughout the implementation of the REWARD and REWARD II programs. “With the Early Warning/Early Response tools and collaborative processes ECOWAS has developed and applied with USAID support to bridge the gap between alert and response, we are confident that the ECOWAS peace and security architecture has been strengthened to continue setting the pace for data driven peacebuilding programming on the continent”, Ms. Pislaru affirmed.

While officially handing over the Telly Award to ECOWAS on behalf of the USAID REWARD, Alimou Diallo, the REWARD II Chief of Party underscored the significance of the award by stating that, “your achievement under this project was of a global scale recognized by an independent body through this Award’’.  The Director of Early Warning of the ECOWAS Commission, Dr. Gueye Abdou Lat, in his remarks, reiterated the Directorate’s commitment to providing germane information on human security through data-driven early warning assessments and analysis.

In line with the key objective of the JARP working group, which is to strengthen collaboration between stakeholders across the early warning and early response spectrum, the meeting convened stakeholders from within the Commission including the Director of Political Affairs, Dr. Remi Ajibewa, the Director of Humanitarian and Social Affairs, Dr Sintiki Ugbe, the Director of Peace Keeping and Regional Security, Dr. Cyriaque Agnekethom as well as representatives from the Directorates of Free Movement. Other participants include representatives of WANEP, the National Centres for the Coordination of the Response Mechanism, (NCCRMs), the ECOWAS Centers of Excellence, the Nigerian Institute of Peace and Conflict Resolution and the National Space Research and Development Agency (NARSDA).