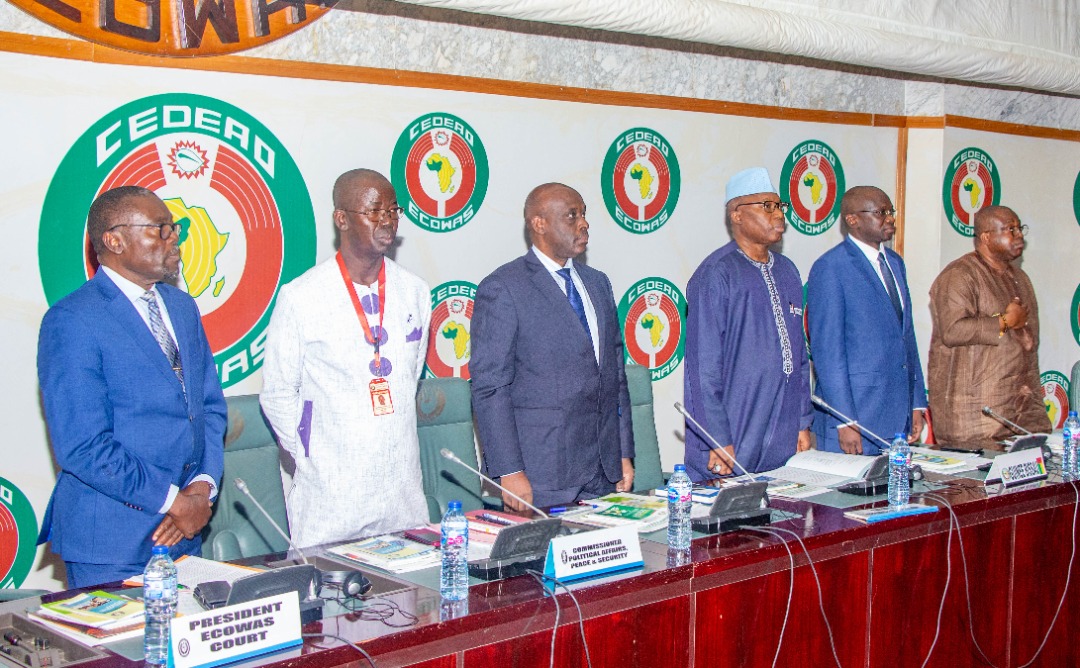 Abuja, Nigeria, September 21, 2022.The ECOWAS Commission joined the rest of the global community to commemorate World Peace Day (WPD), while pledging greater Commitment to regional peace and security at a ceremony which held in Abuja, Nigeria on the 21st of September, 2022.

The Occasion was also used by the Commission to symbolically launch the ECOWAS Conflict Prevention Framework (ECPF)’ special documentary which highlights the regional bloc’s peace-building strides at the auspicious time when ECOWAS takes stock of and makes projections on its conflict prevention efforts -past, present and future.

Addressing the audience that also included on-line participants, the President of the ECOWAS Commission Dr. Omar Alieu Touray who was represented by his Special Adviser, Ambassador Mambury Njie, stressed that, ‘‘achieving true peace entails much more than laying down arms.  It requires the building of societies where all members feel that they can flourish. It involves creating a world in which people are treated equally, regardless of their ethnicity, religion and race’’.

President Touray further maintained that the ideals of the WPD is in tandem with the ECOWAS Vision 2050 which envisages a fully integrated Community of peoples, living in a peaceful and prosperous region, with strong institutions and respect for fundamental rights and freedom, striving for inclusive and sustainable development.

Also speaking at the occasion, the President of the ECOWAS Community Court, Hon Justice Edward Asante who was represented by the Chief Registrar of the Institution Mr. Tony Anene-Maidoh noted that for a region whose recent history is dominated by wars and political upheavals, community citizens, “now have a greater appreciation of the imperative of peace as a critical foundation for constructing our integration edifice”

In his goodwill message, the United Nations Resident Coordinator for Nigeria who was represented by Mr. Ronald Kayanja spoke to the theme of this year’s celebration: End Racism. Build Peace. He stressed the need for a united front against all evils in societies and communities, “instead of fighting one another, let’s come together to fight our common enemy; racism, poverty, climate change…” He added.

After an exultation on the virtues of Peace by the chief host and ECOWAS Commissioner for Political Affairs, Peace and Security (CPAPS), Dr. Abdel-Fatau Musa, represented by the Director, Peace-keeping and Regional Security, Dr. Cyriaque Agnekethom, there were also goodwill messages from the Chair of the ECOWAS Permanent Representative Committee and Ambassador of Guinea Bissau to Nigeria, Mr Joao Butiam, the chief of party, USAID-REWARD Mr. Alimou Dialllo, the Director Research and Policy Analysis, Institute for Peace and Conflict Resolution (IPCR) Dr. Joseph Ochogwu, and  the ECOWAS Staff Representative Dr. Tony Elemelu, among others.

The high point of the event was the symbolic launch of the ECPF special documentary which was done on behalf of the CPAPS by the Head of Division, Mediation and Coordination of Regional Political Affairs (MCRPA) Dr. Onyinye Onwuka.

The International Day of Peace was established by the United Nations in 1981 and represents a symbolic globally shared date for humanity to commit to Peace above all differences and to contribute to building a Culture of Peace.